WHAT IS THE SONIC NAUTILUS?

Definition: The 'Sonic Nautilus' is a Navigation System Through Sound envisaged by music composer Ricardo Climent in early 2008, at the NOVARS Research Centre, University of Manchester (UK).
In April 2008, this research project was supported by SAHC [1] , with a Pump Priming Fund, to allow NOVARS to collaborate with Berlin-based Electronic Engineer Sukandar Kartadinata. The target was to design and construct an optical encoder for the NAUTILUS Navigation Interface, after a tailor made GLUION FPGA System (16bit ADCs, with 32 analogue inputs and 68 digital inputs/outputs) 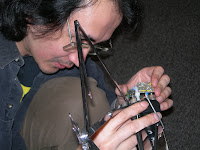 Implementations: Its first implementation is known as the MANTIS NAUTILUS, and it aimed to expand and integrate with David Berezan’s MANTIS System; a 32 channel Control surface (100 mm faders built by DACS), which governs an array of 40 Genelec loudspeakers, primarily for sound diffusion of stereo acousmatic works. A beta version of the interface and system was completed in December 2008. This was followed by further improved versions of the Navigation wheel across 2009.
From 2010 onwards, this Research Tool and Navigation System aims to integrate with other projects started by researchers, composers, documentary filmmakers, sound designers etc. from around the world.

Pictured above the navigation system and a simulation city map

[1] (School of Arts Histories and Cultures at University of Manchester, UK.
Posted by Ricardo Climent