The Research Assemblage Groups on Software design and Interface design at NOVARS [d+p+mm], especially Josh Kopececk had a phenomenal feedback and assistance on this area.
Below an early example of metadata functionality to retrieve audiofiles according to Schaefferian typomorphology, using Spotlight on Mac Os X via MaxMSP
Below, Audio-metadata flow explained - Click to enlarge (full view) 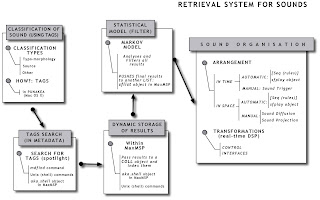 Working example on a max Patch

The system makes intense use of Spotlight for Mac OS X (a search engine to retrieve files from metadata organised by name, date etc., for the latest Operative System (X) of Macintosh computers. Spotlight runs extremely fast on the newest OS). Instead of looking for standard information, it searches for a number dedicated metadata fields such as, the custom taxonomy written on each audio-file . The connection with the audio engine is made in the popular software called MaxMSP, which is piped to the Mac OS X (operative system) using a (Unix) OS command called mdfind, via a Maxmsp external object called aka.shell (a simple window to the command line of the OS). Results returned by mdfind populate another Maxmsp object called coll, which simply prompts the found audio-files, which under certain rules for choices, become available for performance.
Posted by Ricardo Climent