I met Diemo at SMC 09 in Porto this July and went to see his poster presentation.
His system for IRCAM is very smart. He is basically a smart guy but also rather simpatico (weird combination).
cataRT is much clever than my tagging system using spotlight and metadata and less laborious. However, my compositional mind is telling me that there is something wrong about it. Catart basically reads a soundfile, analyses it and create a number of descriptors of the file according to some criteria. It is like an automatic chopper of audio portions. The mini fragments are visually displayed in a X-Y coordinate map, which can arrange them according to some spectral choices, dynamics etc. Then, it is possible to playback or retrieve these chunks with a mouse pointer or an external controller.
I tested it for quite a while using different kind of sound sources and having in mind a potential mapping of the Maze scene. My initial idea was that instead of creating a sound design of the rickshaw wheels when they move, I could sound design the floor of the corridors where the rickshaw will pass. I managed to map the maze and pass on the rickshaw coordinate positions in blender (within the maze), to max, linked with he cataRT part. No mysteries in this part. The sonic results where had a potential but it was too present and at all times. The maze has the crystal balls, which are the solo part in terms of sound worlds and it did not resulted very organic when both where together but was better when time between crystal ball impacts was too long (it was filling the gap). I trust the main problem I have with catart is the same one I have with algorithmic composition. Someone else is deciding the points to cut the tape and how to classify sonic data. You save time in the short term with the automatic descriptors but in the long run, I do not know how to use them and find sonically more powerful the tagging system I have. My tagging is very time consuming because I can spend months designing the 4000 mini sonic cells who live in one composition like this one, but this laborious process is in a way the driving force of all my thinking. In catart, Diemo is thinking for me (well, his system) and although I said he is rather nice, I prefer to decide where to split the tape myself. Perhaps what I need to do is to spend more time with catart and see if I can obtain better results.
Some pictures below with the experiments I did: 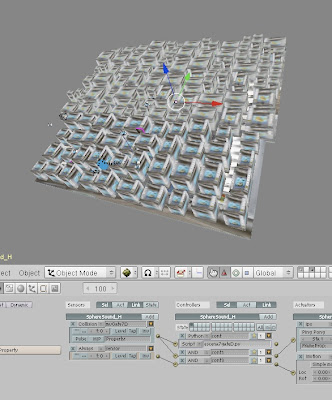 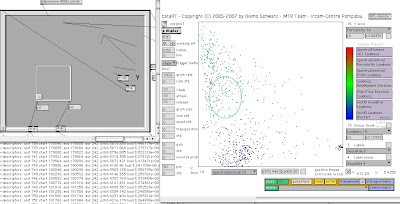 mapping a file and plahying it back