I am not sure whether 3D modelling and motion capture techniques and game engines are the right direction to take in the context of this research, but I though it was worth spending a limited amount of time investigating this tool and new world. I've been fascinated about some of the capabilities of this software , the the potential behind it and its possible interaction in many areas of my existing research, not only in this context.

When sketching ideas for Ho, I realised the fact that additional needs were necessary, after finding a location in Vietnam, in order to make the scene and sounds more entertaining and engaging. I only came across this idea after talking to people about it. For example, in location 1: the traffic scene in Ho Chi Minh, (which will have plenty or surround sounds with doeppler effect resembling the energy of cars and motorbikes), it may happen to be too boring and therefore, I though about finding a story within this location. One funny one I came across consists of crossing a street in Vietnam; apparently, it is extremely dangerous, unless you know how the rules of engagement work between pedestrians and mobiles... below an unbelievable video, which has nothing to do with the lollipop men/women we find in UK...

I though I may recreate a similar scene on 3D by adding some type of dynamic animation using blender and associated sounds but not sure whether this would contradict some of the initial goals of the project and how much of my precious research time I would had to 'waste' to get into it. Drawing the models proves to be quiet hard, to start.

Below an example in Blender of a skeleton 3D model reconstructing the data captured by a motion tracking system of sensors and cameras typically used in 3D animation studios. You may remember Polar express and Tom Hanks doing all the different characters.


I learnt basic concepts to create a game engine and did my first simple game, controlling real-time movement with a Saitek Rumble P3200 joystick I acquired in a shop. 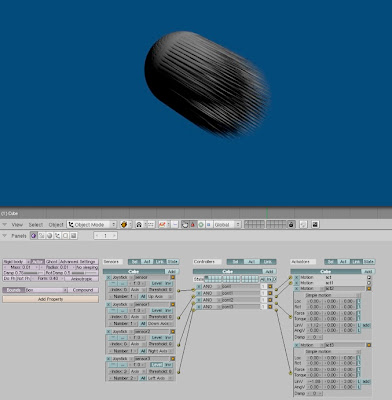