FIRST IMPLEMENTATION: HO
(Taken from sketches and initial ideas)
The first creative work taking advantage of this system is based upon recordings and pictures obtained in Vietnam. It takes place in two opposite sonic scenarios; the first one is Ho Chi Minh City (former Saigon), which sonically speaking is extremely polluted and the second one is its nearby Cat Tien National Park, currently a peaceful area but in the 1960s potentially a dangerous war zone.

The work is composed for two different moments of time (war and peace), where sounds are employed for terrestrial navigation but also to travel through time. Ongoing research and the editing, composition and montage of sound materials, including their assemblage in the system has taken place at the NOVARS Research Centre, University of Manchester, UK; and the Surround Wunderbar Studio, Berlin. 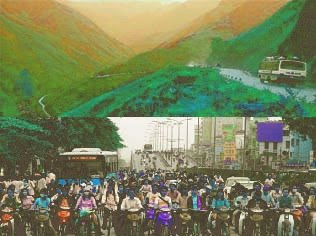