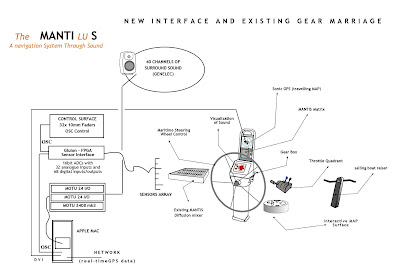 The Navigation System Through Sound aims to serve as a vehicle to stimulate and immerse audiences in specific time-space coordinates, while listening to a dynamically-choreographed sound associated to the journey, with the firm intention to preserve a focus on sound over visuals. Centre to this project is to research on the creative possibilities of an innovative performative and compositional tool, based upon the principles of space in music composition, including large multichannel systems and informed by the aesthetics of acousmatic music/ musique concrete and soundscape composition. It incorporates a dynamic system using cartographic aid in the form of a city/landscape travel map, large-scale slow-moving images and text in the context of a narrative form. Despite it may be associated with radiophonic work, documentary films, virtual reality navigation and gaming, it remains primarily as a music composition tool and it distances itself from such traditions and media.
The performer/composer ('as the captain of the ship'), controls the interface of the 'Nautilus', which is inspired by Maritime navigation leading audiences to a Sound Journey with critical stops in specific locations with unique sonic interest. The system resembles a vessel's steering wheel combined with flat computer screens and other small navigation tools and controllers. It is located in the middle of the concert arena (e.g. a concert hall, a museum, a public space), which includes a large video screen and it is surrounded by speakers. The focus will be on examining new methods for dissemination of sound as a Sonic Journey through urban or ecological environments.
Cartographic Maps and basic visual aid contextualise the listener in specific X/Y coordinates during the Sonic Journey, which is a self-contained story.
How does the system operate? Pre-composed musical mosaics such as short transformed audio-files are classified according to the following criteria:
a) Its typomorphology (sound spectrum description, texture, shape, articulation etc.)
b) Its geo-position coordinates (location on a geographical space), often associated with the original plot where the recording took place but not always, should the source sounds be heavily transformed.
Posted by Ricardo Climent